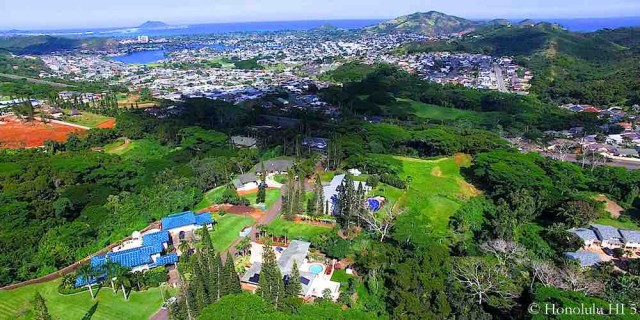 Kailua is justly considered a real estate buyer’s dream. There’s nothing so attractive as living by some of the most famous shoreline on Oahu in a town that has held on to the Old Hawaii feel. What so many miss is that there’s a further depth to the place you only see once you look closer at its individual neighborhoods, instead of the high profile center.

Many would be surprised to know that you can own a farm in Kailua, for example. But you can. There’s a rich variety in living spaces here in both the homes themselves and the environments surrounding them.

One aspect that does need to be acknowledged first, however, is the presence of development in this community over the years. Though they haven’t played nearly as large a part here as other areas of the Island, their imprint is still significant on these lands.

Where the Planners Built in Kailua
The term ‘Kailua Development’ is often thought to be an oxymoron. It’s undeniably true that many of the town’s neighborhoods were created by collections of individual owners who bought the lots empty and then built on it. However, even this community has a few areas that came from a developer’s plans. Most of them are easy to identify for a very good reason. 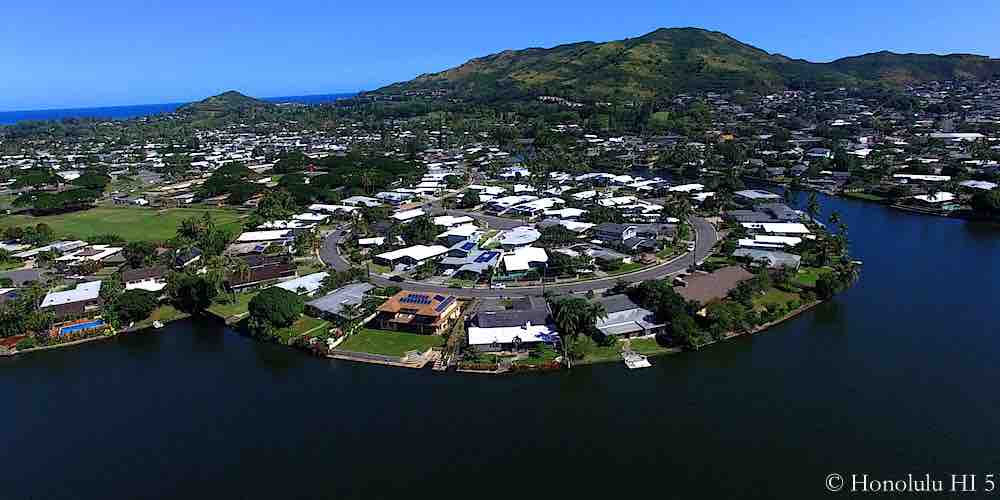 The giveaway is that they almost all sit on the mauka side of town, by or near Highway 72 heading to Waimanalo. Two prominent examples are Hillcrest and the larger Enchanted Lake neighborhoods, which were created in the 1970’s, a time of booming construction and population growth all over Oahu. They were also a result of the Pali Tunnel opening in 1961, though a delayed one due to Kailua’s resistance to construction even then. 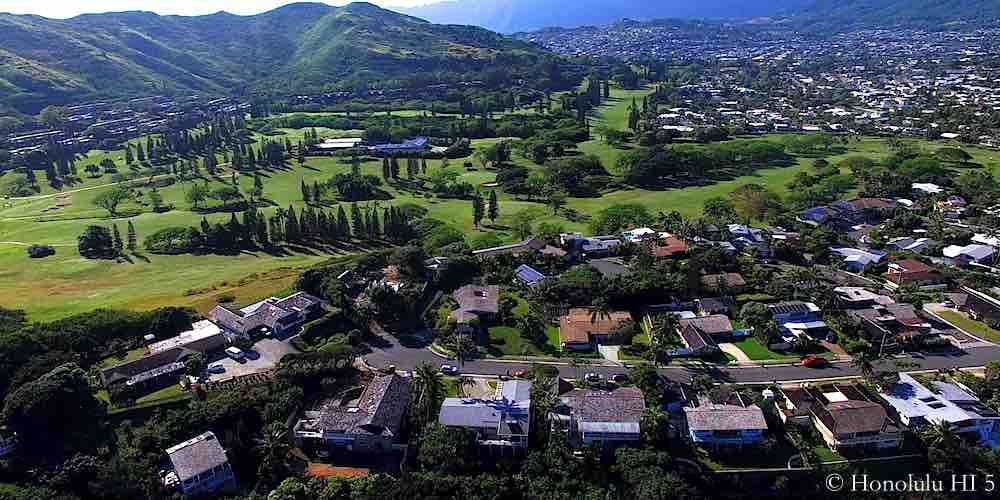 One exception to the Mauka Side rule is Country Club Knoll, but it was initially intended as part of the Enchanted Lake district. It was also put in place in the 1970’s, becoming its own entity by completion. Unlike the other areas covered here, it sits on the hills above Kailua Beach, perched beside Mid Pacific Country Club. 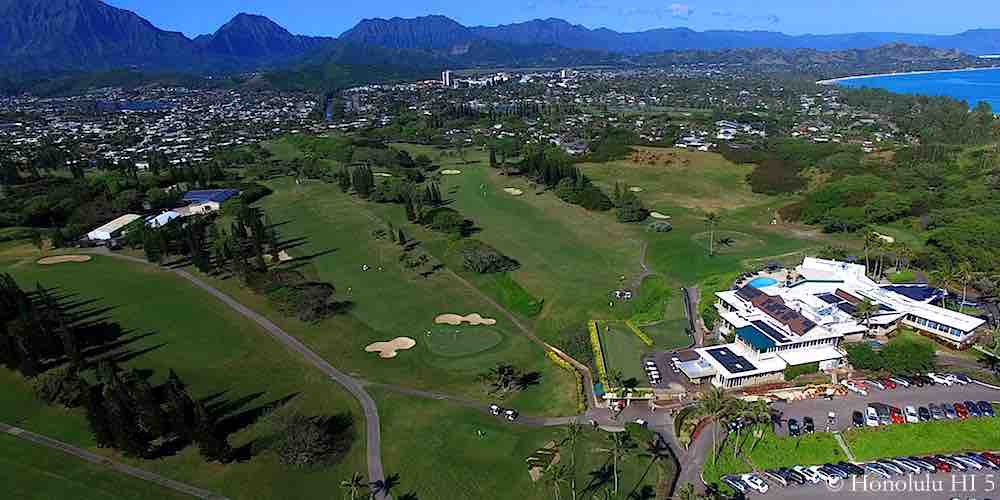 Kailua Bluffs is a later addition, coming in the 1980’s, but the developer created homes were joined in the coming decades by individual owners who built on lots left open. That’s why you see structures of obviously different ages scattered throughout. 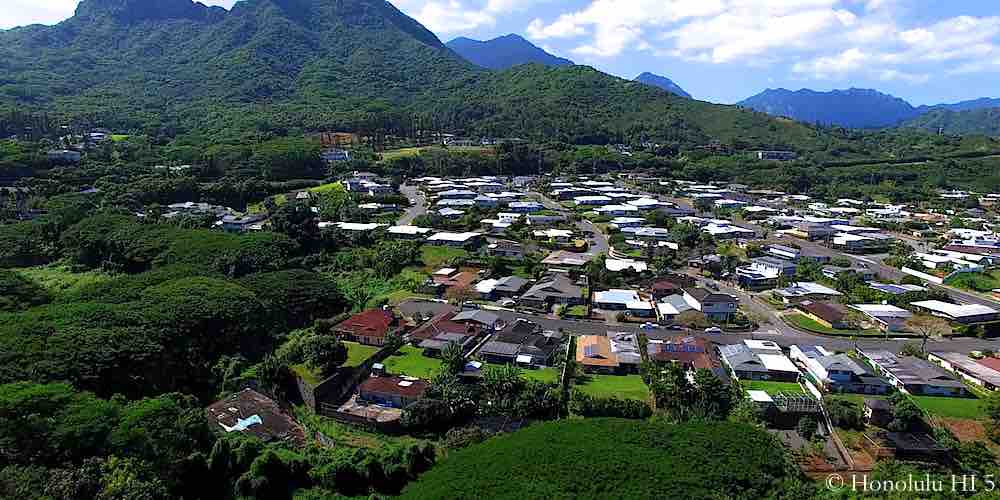 After this period, larger development stopped in Kailua, a condition that has only been broken in rare instances. This is due to the residents’ objections to any more big projects as well as a shortage of areas left to build upon.

One exception is a community that has just opened up – Olomana Heights. You’ll note the Mauka Side rule is followed once again here. One way it differs is that it is a return to the open lots system, so technically it’s not a full development. The developer carved out roads and some infrastructure, but the land is left bare for the new owner to create upon as they wish. 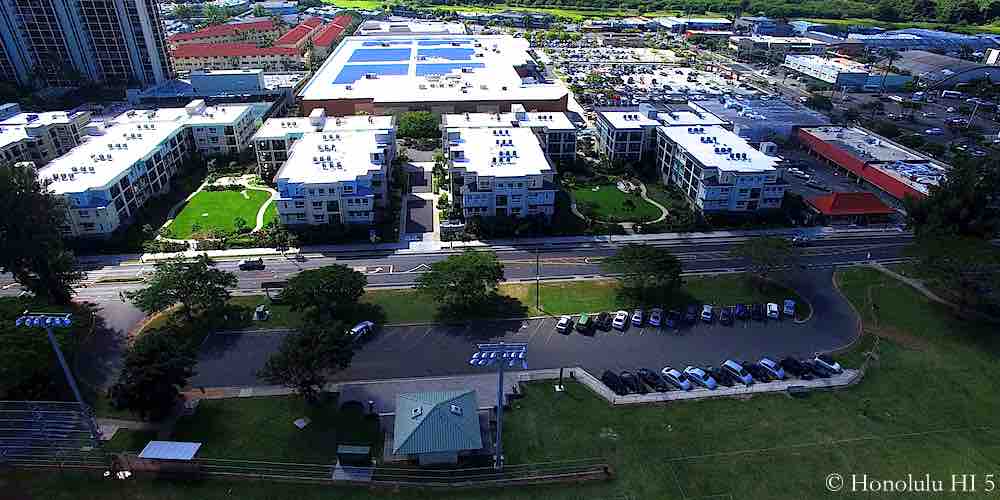 Where builders have found a foothold here and there are in smaller condo communities, the latest being Ka Malanai, its 153 units divided between six buildings that stand a towering, for Kailua, four stories tall.

The foreseeable future for additional residences in this town lies in these pockets of small communities being added here and there. It will not add significant numbers of new homes to Kailua and, for current residents, that’s just fine with them.

Kailua: Built On Organic Real Estate Growth
That reduced level of developer presence alone has created a huge diversity in the homes that fill the neighborhoods here. You won’t mistake anywhere in Kailua for the planned layouts and floor plans of Kapolei, for example. These are homes built on individual tastes, desires and budgets. 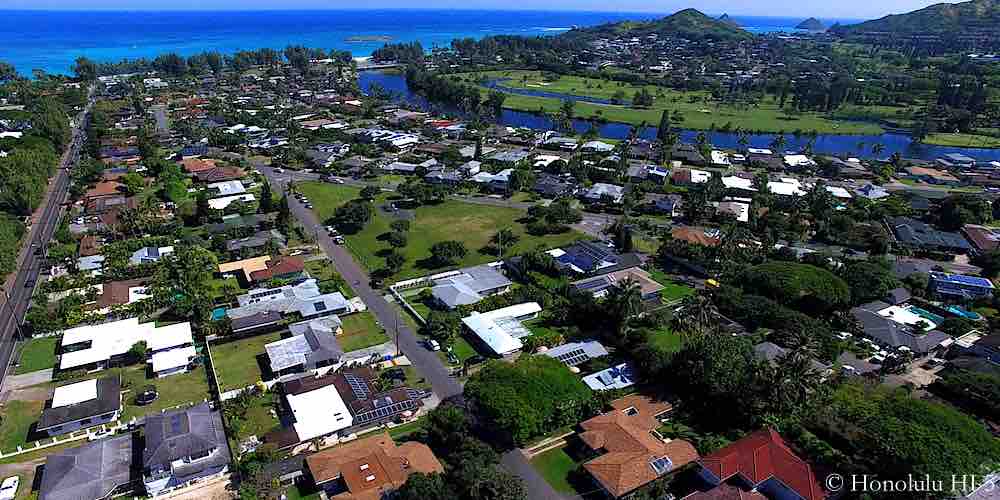 More than that, they come from extremely different eras. In Kalama or Kailua Estates it is easy to find houses put up by kamaaina in the 1930’s and 40’s, with their simpler, yet always distinctive designs that mark them unmistakably as Islander abodes. 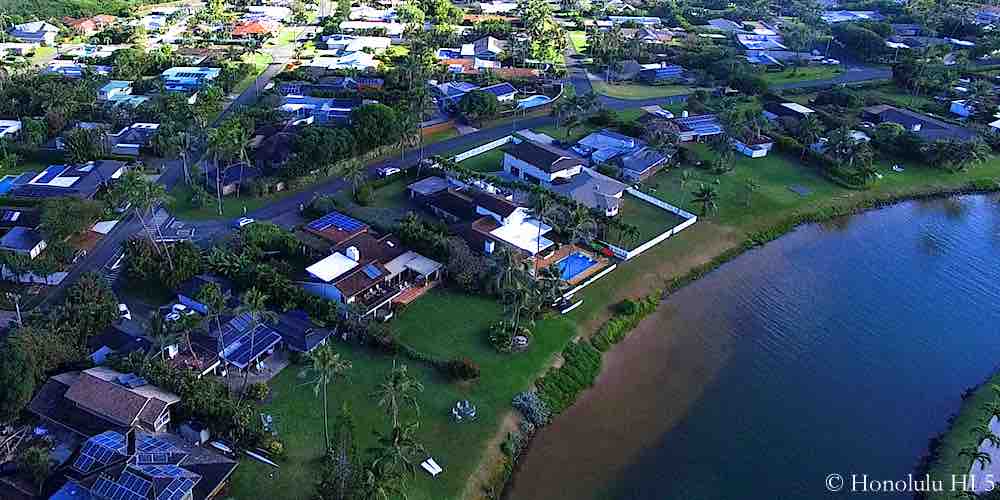 Head over to Kuulei Tract or Kaimalino and you’ll see many that date from the 1950’s to 1970’s, when Kailua first started adding to its population at a faster rate. They kept much of the kamaaina style in these homes, with open interiors and inviting wooden exteriors, though with Mid-Century touches that place them in that era decisively. 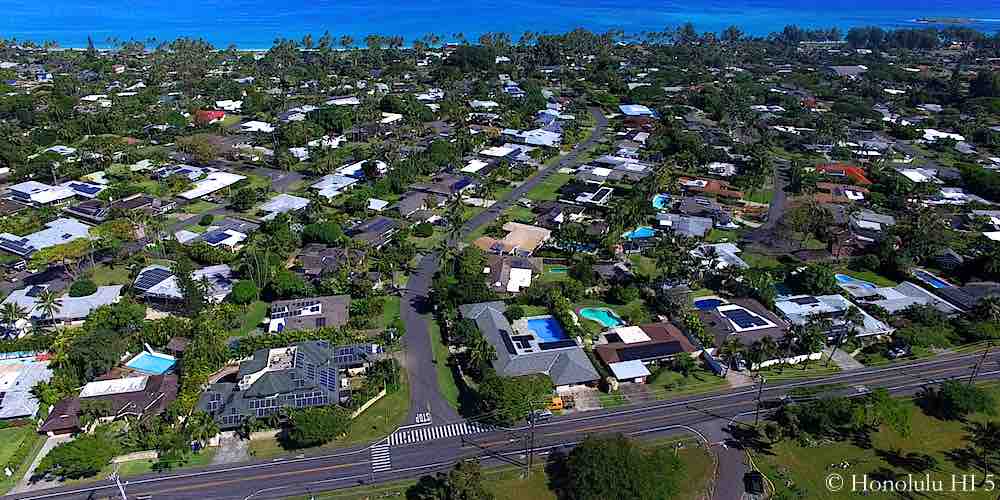 Still, even these communities aren’t preserved time capsules of one era across the board. Your experience more commonly is what you’ll see best in a neighborhood like Kawailoa Kailua or Coconut Grove, where early 20th Century residences sit beside those built in the last 2 decades. 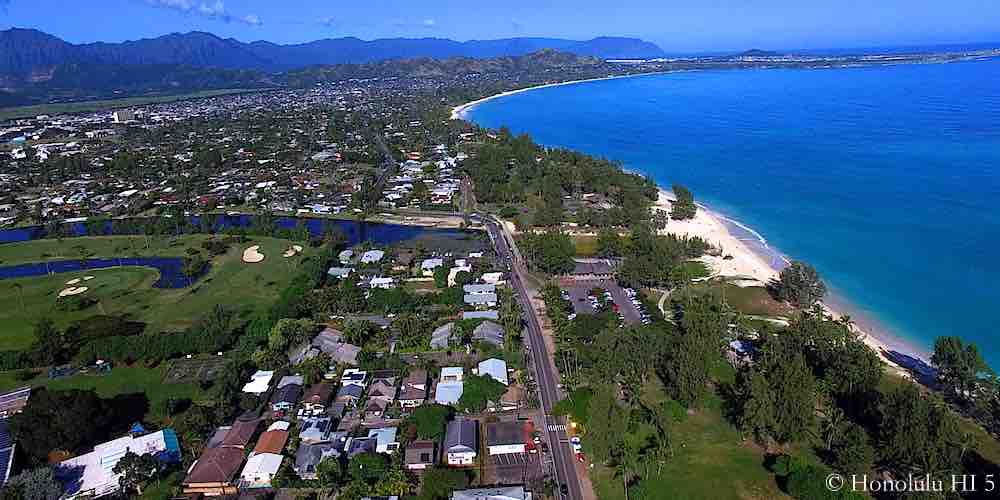 That’s often due to the passage of time, tastes or the termite, resulting in new homes in the places of the old. From reading this you might be tempted to call it a crazy quilt, with so much separation in ages here side by side, but they don’t present a jarring or confusing experience. That’s no accident.

Kailua homes are united by common concepts, like low sightline impact, most sticking to one story, and open areas, leaving space around the residences rather than taking up the entire lot with the structure.

The layouts are not uniform, but the feeling is, creating a harmony within the diversity, just like the many cultures that make today’s Hawaii so wonderful.

Kailua: More Than Just a Beach Town
That extends to the living environments of Kailua as well. Wherever you are, you live in a community committed to a slower paced, fresh air oriented lifestyle. Still, that mood takes on different forms and landscapes.

If we begin with the outer, Pali side limits we find ourselves in the least known parts of Kailua, at least to outsiders. That’s because they’re purely residential and furtherest away from the shopping district and shoreline.

These areas like Olomana, Pohakapu and Kaopa sit in the lands where the Pali finally ends its descent, granting them close up views of the Koolaus standing right above them in their green splendor. Living in their shadows is a side of Hawaii scenery that is under appreciated, but those here truly ‘get it’. 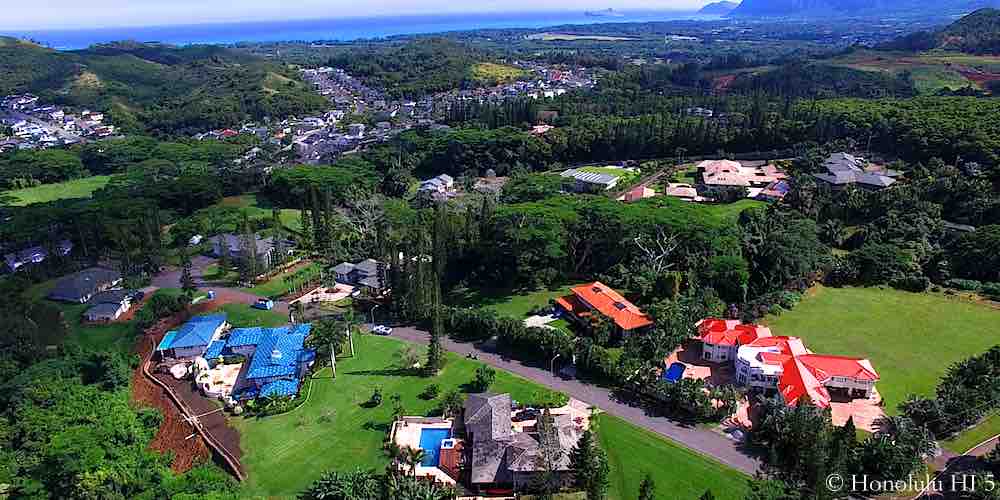 Even more unknown than these is the Norfolk neighborhood that also sits off Highway 72. Back on these roads one comes across a completely Country district that would surprise most to know exists in Kailua’s boundaries.

Lots are extremely large, a third to half an acre, with house sizes to match, up to 10,000 sq ft. It doesn’t just look country, either. This is zoned Agriculture land. Many live here specifically for that reason, keeping animals, especially horses, along with doing some farming as well.

Though hidden from sight from the highway, a lot of the properties are elevated so they get the sweeping views out to the ocean that homebuyers dream about. It’s a pocket of this city even locals couldn’t tell you much about.

Cross the highway and you’ll find the better known Enchanted Lake, built around the waters that cover 95 acres. Here you live near or even on what is basically a private lake, at least as far as access from here, yet one that connects with the ocean. Here you live on a shoreline that tourists or even non-resident locals cannot gather on, keeping the serenity intact perpetually. It’s a unique situation, not just in Kailua, but all of Hawaii.

Country Club Knolls, once envisioned as part of Enchanted Lake, instead is now another singular environment itself. Its homes line the sides of Mid Pacific Country Club, granting them views of the fairway and greens that have their own special brand of peaceful contentment to all who gaze on them.

For some, though, nothing can compare with close up ocean views, though. Over the hill from Enchanted Lake is where you’ll find it best. Kailua’s beachside geography means you can have these vistas and even live across the street from or even practically on the sands themselves. 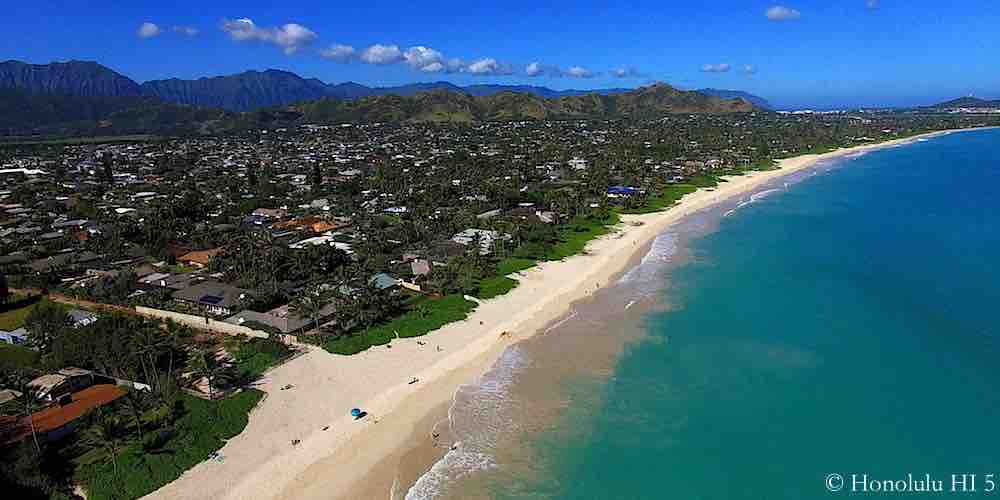 Names like Kaimalino, Beachside and Kawailoa are ones you should know if that is your preference. All are filled with properties that live within the sight and sound of the soothing waves. Hitting the surf is a matter of seconds, not minutes from your home. Yet one other name crowns them all in this category. 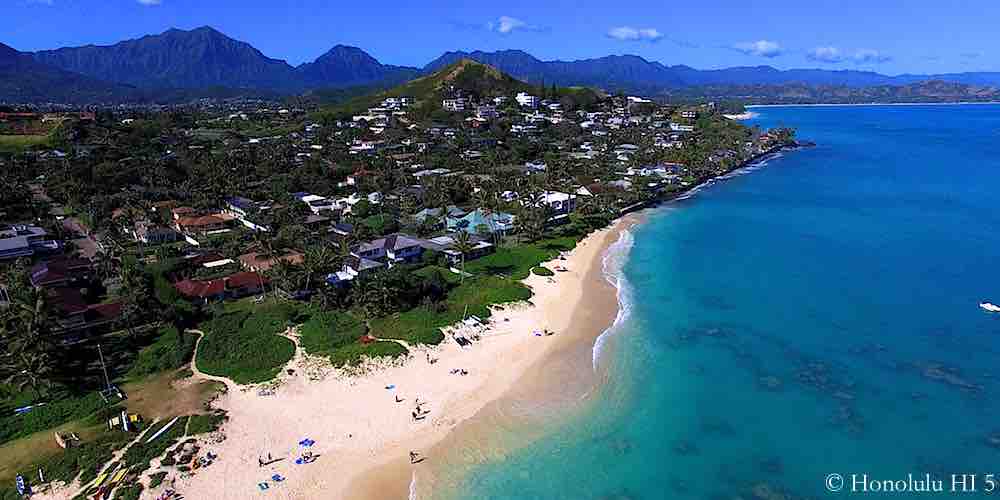 Lanikai is the southernmost reach of Kailua on the coast, famed for the chance to dwell beside one of the very best beaches anywhere. That reputation means something when the next beach over has won the Best Beach award repeatedly itself.

The luxurious homes here sit on a hillside, creating greater sightlines for all that only get better as you head upward, adding greater distance to your vista. Easily one of the most exclusive neighborhoods on Oahu, they justify it with one look, both inside the homes and out to the Pacific.

This tour of Kailua, though certainly not a complete one, is intended to make an important point. This is a town that has much more to offer than the shortsighted perception of one or two styles of homes in a neighborhood that could be almost anywhere in its limits. Far from it. 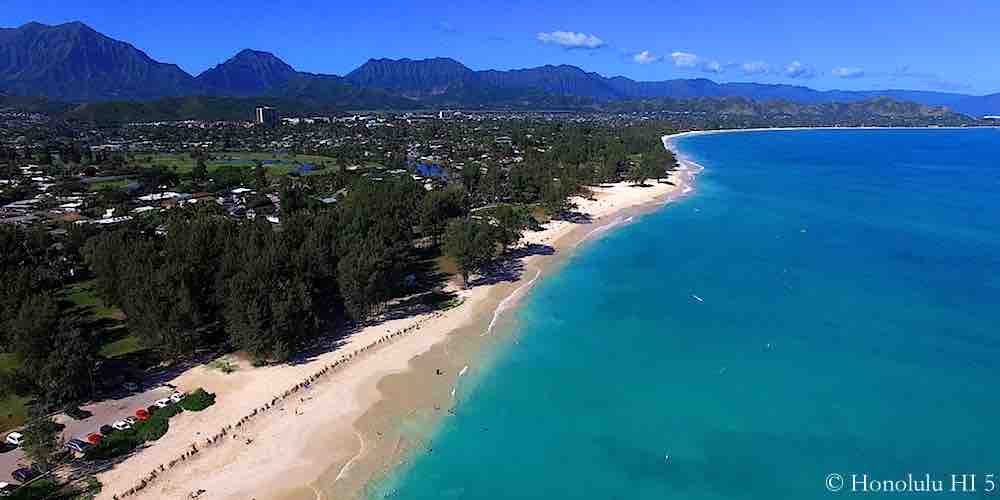 Come and take a drive around these different communities and you’ll find an array of scenery, backdrops and living spaces than you ever thought possible. Kailua is no one note district, built on Kailua Beach Park or the quaint shopping and dining of its center.

Those are important, and extremely attractive, focuses of the life here, but they aren’t the entirety of what it is to live in Kailua by a long shot. There’s much more beyond these attention-getting features that make up what is truly great about being a part of this deservedly desirable place. A place you just might be lucky enough to call home someday.

From around the web also check out Go Hawaii’s Kailua and Wikipedia’s overview of Kailua.