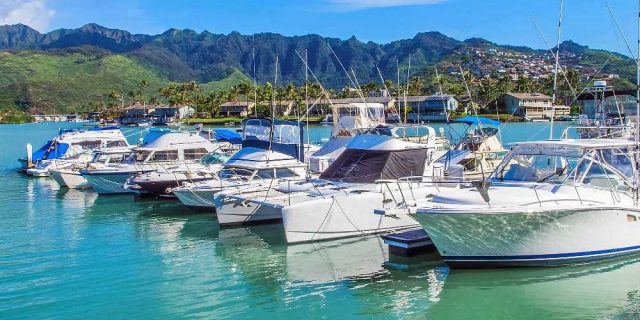 Hawaii Kai’s special allure and its amazing lifestyle has been previously discussed. There simply isn’t any other place where you can ride your boat from your own backyard dock across the marina to go shopping, catch a movie or dinner.
Or, you might like to ride out to the ocean, due West around Diamond Head and temporarily moor your boat in front of Waikiki.  Paddle to the beach, enjoy a Waikiki sunset dinner and cruise your boat back without having to deal with traffic lights.  Life is a vacation.

If living on the marina strikes your fancy, you have come to the right place to check our compilation of Hawaii Kai’s top marina front homes and neighborhoods: 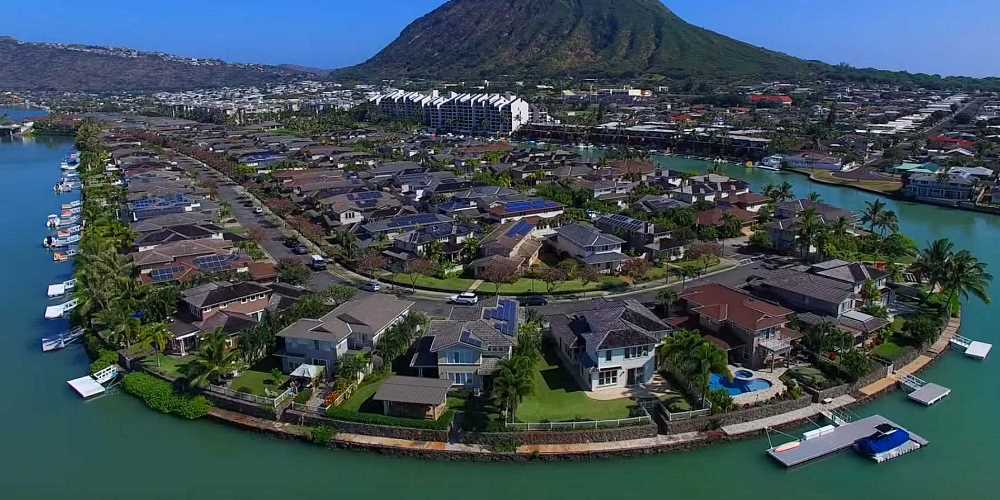 There are only 27 of these Executive Residences in 3 different floor plans with between 2,145 and 2,663 sq ft interior living space.  These homes are considered the cream of the crop at the Peninsula at Hawaii Kai, featuring soaring ceilings central AC and all other typical modern amenities.  No wonder these are a popular choice for marina front home lovers.

The Executive Residences are located along the north western shore and towards the most western tip of the peninsula, all with prime wide marina frontage.

If you are looking for a newer construction marina front home in a clean looking modern master planned community with the added benefit of the security gate, than check these out.
See all Executive Residences for sale here, look for street address 520 Lunalilo Home Rd. 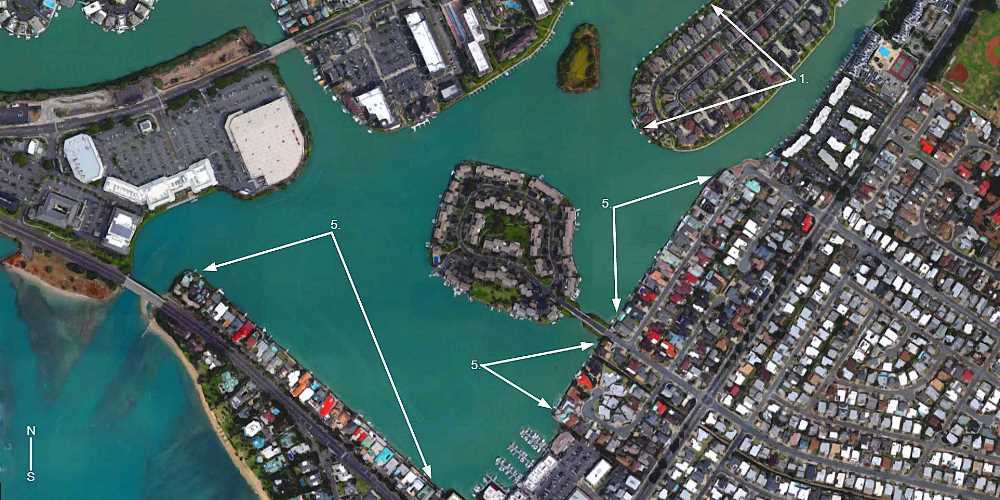 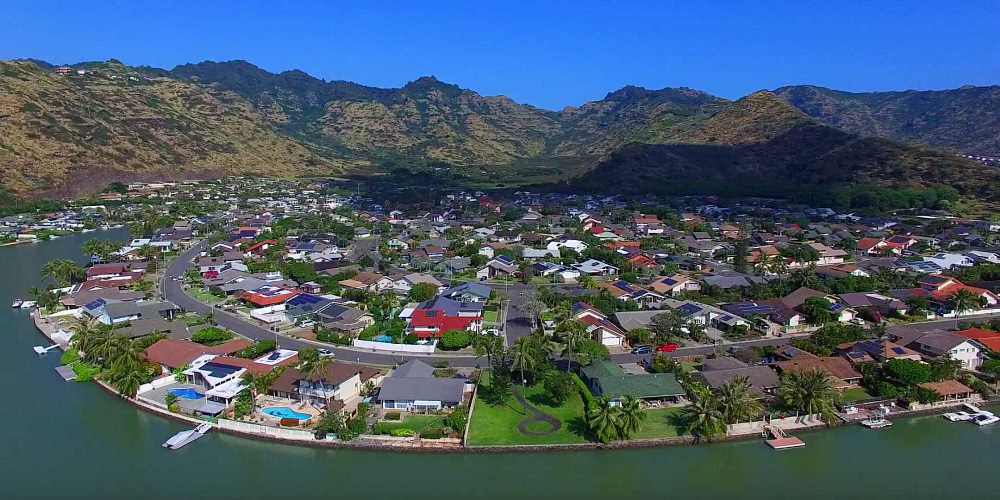 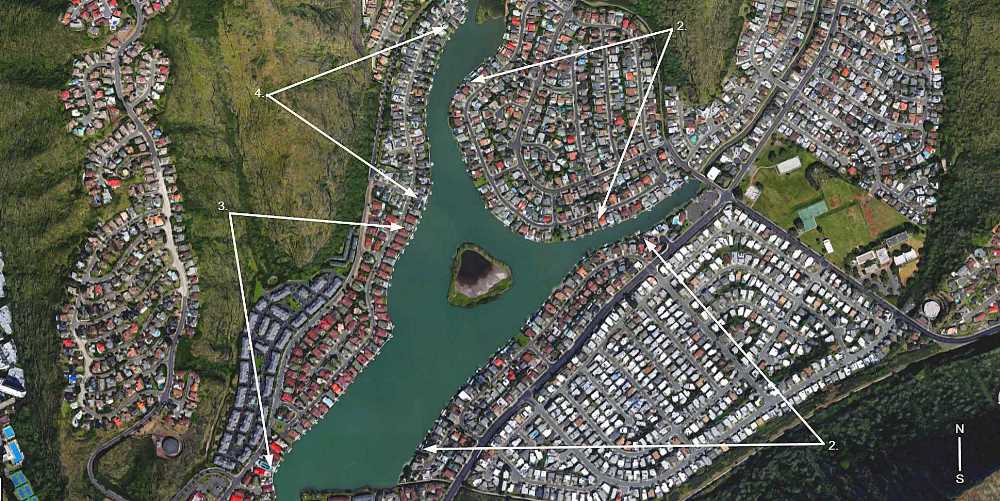 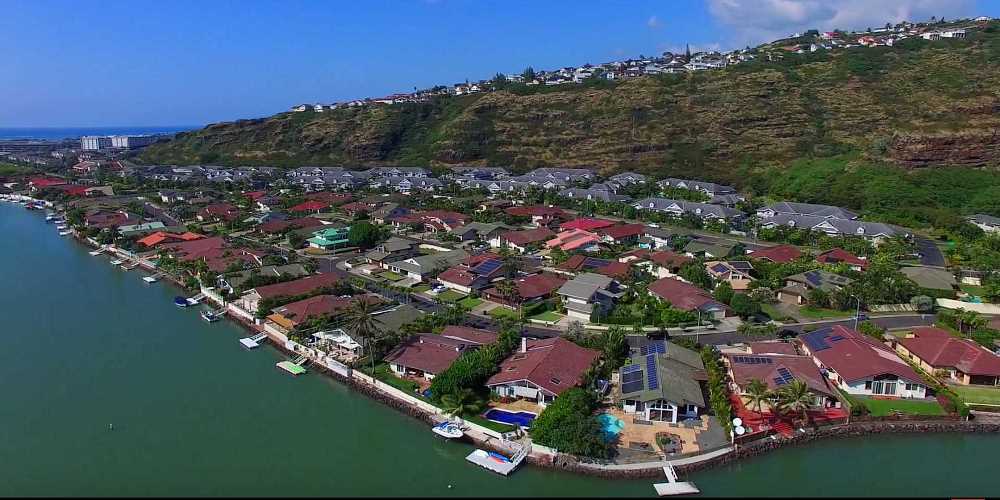 Anchorage homes were developed between 1979 and 1981.  Only 42 of the 105 homes are located directly on the marina. The typical Anchorage home features soaring open beam cathedral ceilings and a signature concrete tile roof.

The most desirable widest marina section within the Anchorage neighborhood includes the homes between the 7249 and 7321 block of Makaa St. These homes enjoy the green views of a small marina island bird sanctuary and are the farthest distance away from homes across the marina.

Anchorage marina front homes are generally overlooking the marina in a south easterly direction with the prevailing Tradewinds sweeping in a perpendicular direction. The impressive Koko Crater is a magical sight across the water.

The Anchorage neighborhood includes a small private mini park with boat ramp for its resident’s exclusive use.
See all Anchorage homes for sale. 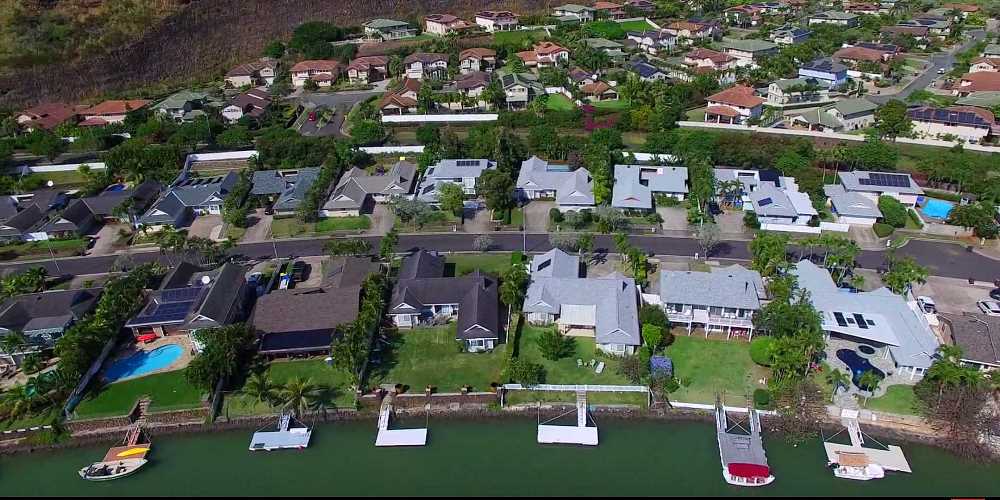 Only 29 of all 63 Kealaula Kai homes are located directly on the marina. These homes look a little different compared to the Anchorage homes.  Kealaula Kai typical design features include board and batten exteriors, bay windows and composition asphalt shingle roofs.

Views and orientation are similar to the Anchorage overlooking the marina in a south easterly direction with the prevailing Tradewinds sweeping in a perpendicular direction.  It is quiet here towards the back of the valley at the end of the marina. Life is good while you marvel at the impressive sight of Koko Crater across the water.
See all Kealaula Kai homes for sale. 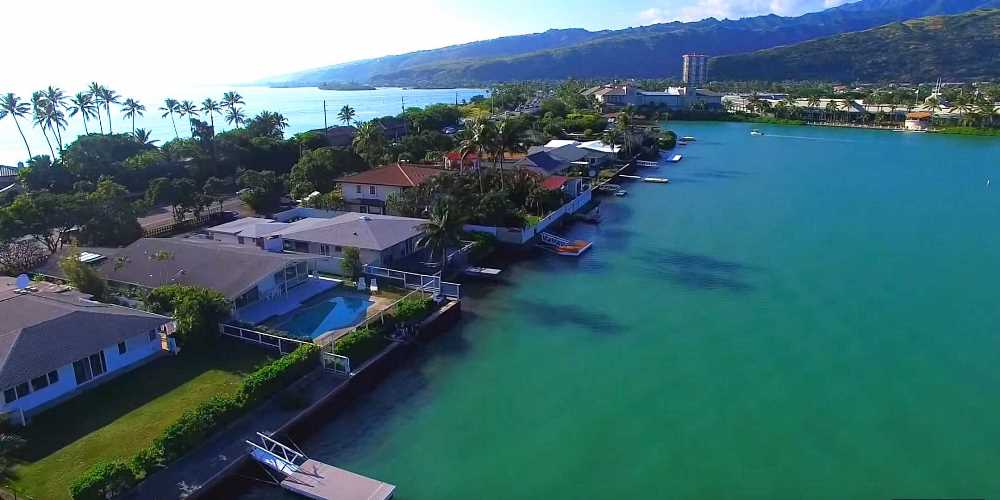 The first section consists of 31 marina front homes, the majority developed between 1963 and 1967 (with a couple newer exceptions) located along Kalanianaole Hwy.  These homes enjoy the quickest most direct access to Maunalua Bay and the open ocean.  If you prefer boating on the open ocean rather than just within the marina, you might want to consider this location.

Be aware of the 13 foot maximum height clearance under the bridge to get from the Hawaii Kai Marina to the open ocean.

Luna Kai homes along Kalanianaole Hwy also enjoy some of the largest marina front lots available in Hawaii Kai most of them between 8,125 and 9,900 sq ft, plus an additional shared parking / driveway area in front creating a convenient buffer distance from the street.
Luna Kai residents appreciate the wide marina at this location and the impressive long marina views towards the back of Hawaii Kai.

This location does get windy. The prevailing Tradewinds tend to blow the long way over the marina to naturally cool your home. Here you will experience a bit more boating and waterskiing traffic, together with street traffic along Kalanianaole Hwy.  This location will provide quick convenient access to downtown Honolulu.

The second section of the Luna Kai marina front neighborhood includes 24 marina front homes developed between 1966 and 1969, just east of the Koko Marina Shopping Center located at the end of Anapalau Pl and Kaumakani St.  These homes originally were all designed as single level homes on lot sizes mostly between 6,500 and 7,500 sq ft. The Luna Kai homes along this stretch of the marina are facing in a northwesterly direction, enjoying some of the finest sunset views across the water.
See all Luna Kai homes for sale. 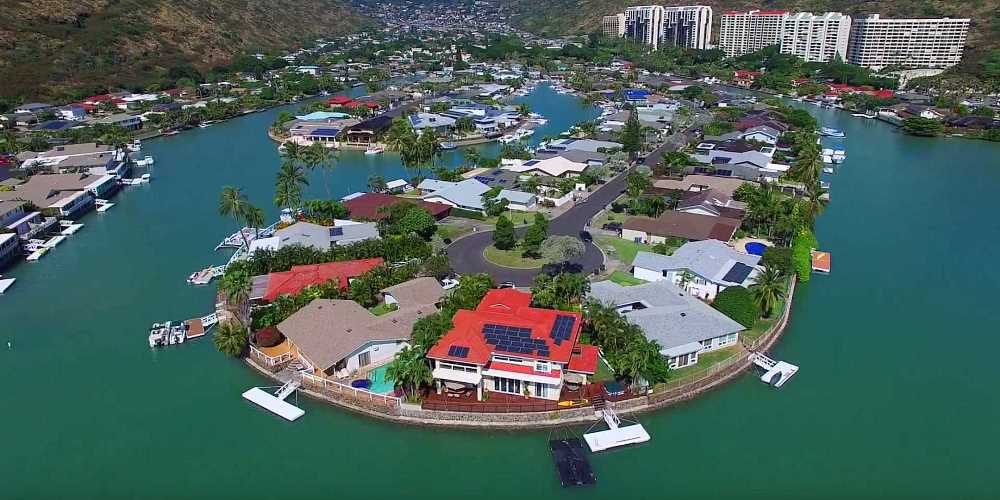 Spinnaker Isle consists of two peninsulas that protrude parallel into the Hawaii Kai Marina just south of Hahaione Valley.  Spinnaker Isle homes were originally developed between 1968 and 1970 as single level homes on lots between 7,190 and up to 9,800 sqft.

All 92 homes are located directly on the marina along both sides of Kumukahi Pl.  At Spinnaker Isle the marina can be bit more narrow and the back portion of the marina finger, in between the two Spinnaker Isle peninsulas, have a sloped concrete embankment rather than a vertical rock seawall.  For the most part you still should be able to moor a good size boat at Spinnaker Isle. The best marina front locations within Spinnaker Isle are towards the tip of both peninsulas.
See all Spinnaker Isle homes for sale. 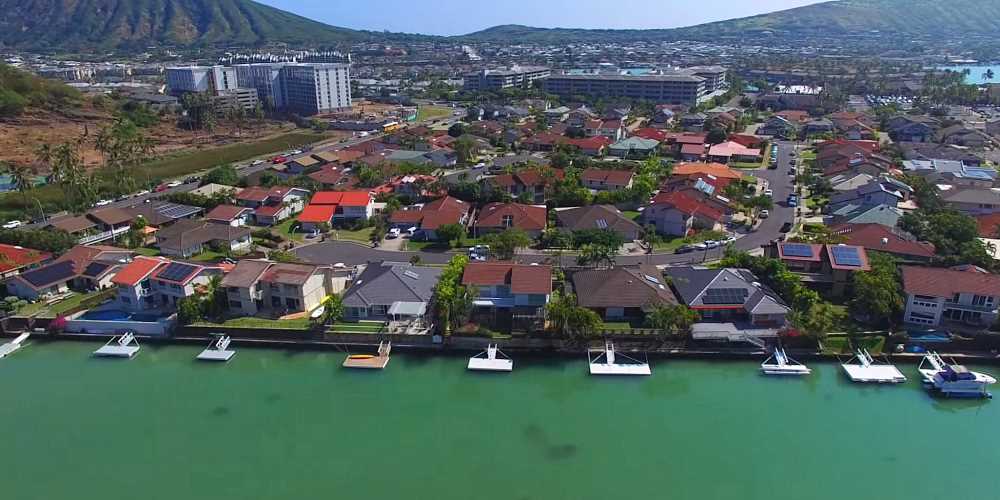 As the name implies, the West Marina neighborhood refers to the western section of the Hawaii Kai Marina. That includes all marina front single family homes within the perimeter streets Kawaihae St, Hawaii Kai Dr to Keahole St, and Keahole St back to Kalanianaole Hwy. The exception is Spinnaker Isle which has been discussed separately above.

The West Marina neighborhood technically includes the ‘Executive Residences’ already discussed separately at the top of our list.  These are listed in the MLS as part of the West Marina neighborhood, although the newness and design puts them in a completed different class of their own. Hence, they deserved a separate mention and took the top spot on our list. You will recognize the Executive Residences by their ‘520 Lunalilo Home Rd’ street address within the newer gated Hawaii Kai Peninsula subdivision.

Other than the Executive Residences, most West Marina homes were originally designed with a single level layout. The West Marina neighborhood happens to be a bit stretched out and includes diverse sections along the marina with homes of different types and sizes. That includes the red roofed, white stucco exterior homes along Hawaii Kai Dr between 6751 and 6791 Hawaii Kai Dr located across the street from the Oahu Club.

Also included are the homes referred to as ‘Marina West’ along Ainahou St and Kaialohia Pl. These homes enjoy a wide open marina view towards Spinnaker Isle.

Noteworthy are the 4 newer, 2002 built marina front single family homes in a small CPR development called Kainui Court located behind the gate at 321 Ainahou St.  This is the only gated Hawaii Kai marina front community of detached single family homes, besides the Executive Residences mentioned above.
Search all West Marina homes for sale.

We hope you enjoyed our compilation of Hawaii Kai’s top marina front single family home neighborhoods.  Look around and you will realize there is no more remaining vacant marina front land to develop.  The forever finite and scarce supply of Hawaii Kai marina front homes creates value.  The upside potential is unlimited, and the lifestyle is priceless.

Perhaps we inspired you to explore marina front living further. Let us know what you think.  We like to hear from you.  ~ Mahalo & Aloha