Honolulu Condo Developments – Past to Present 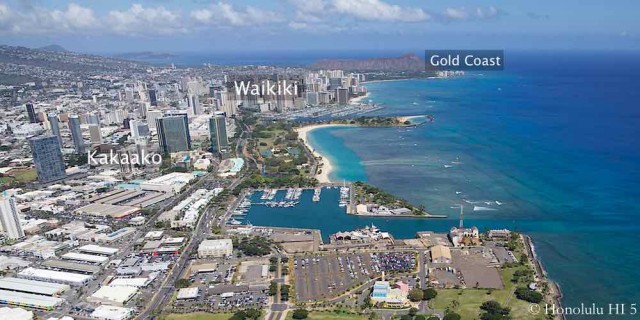 Honolulu’s real estate history from the Mid 20th Century to the present day is the story of one kind of home – the condominium. An accelerating population on a limited land mass made that a certainty. It altered dramatically the landscape very quickly, changing what was a low-rise, low-key town into a modern city.

You may be tempted to think that these massive alterations to Honolulu resulted in cut-and-paste neighborhoods. A condo in one part of town is the same as one in another part. Nothing could be further from reality.

Take a look at just a few of the districts where condominiums make up the majority of residences. You’ll see how different your Honolulu condo experience can be, just by driving a few miles. A small distance that can make all the difference in your home buying – and owning – future.

Waikiki – Where Condos Rule the Land 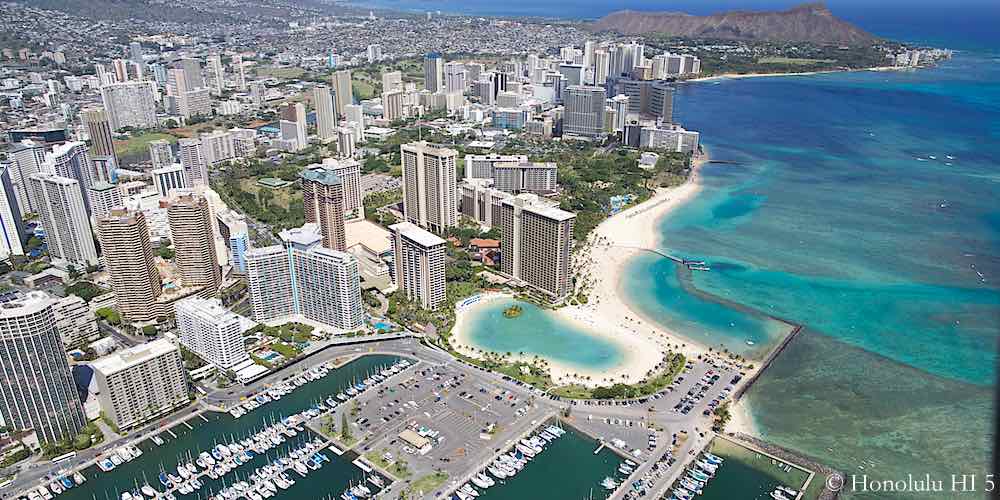 Beginning sometime in the late 60’s the local joke was that our State Bird was the construction crane. The sight of these towers all over town was just part of the everyday scenery then, even more than today.

Nowhere was this more true than in Waikiki. We start there because the district was and is the king of the condo neighborhoods. But it wasn’t always that way.

It needs to be said that there have been apartment buildings from the early decades of the 20th Century, especially in Waikiki. They were almost all strictly walk-ups and some of these are still around today. Almost all went condo sometime along the way. We’re not concerned with those. This is about the emergence of residences built as condominiums from the very start, a process that initially took hold in the 1950’s.

Foster Tower on Kalakaua Avenue was the first significant high-rise condominium property in Waikiki, opening up in 1962. It stands out dramatically in photos from that era, reaching heights unchallenged by almost anything else in sight. It is still unique today, being the only residential condo building on that golden strip along the beach. What didn’t last long was the way it towered over the lands mauka of Kalakaua.

There are still some residents of Waikiki who can tell you about The Jungle, the name once given to the part of Waikiki between Kuhio Avenue and the Ala Wai. On these streets were old houses and walk-ups that had deteriorated for years, with little upkeep, creating a low rent district that was notorious for its ‘anything goes’ atmosphere and a cast of colorful characters.

It was finally the combination of the need for more efficient housing, the dilapidated condition of most of the residences, along with loud community outcry, that would finally bring huge changes that would end The Jungle forever.

The process wasn’t overnight, since some of the old structures were still present and occupied well into the 1970’s. Beginning in the mid-1960’s, though, the rundown single family homes began to be cleared and multi-story condominiums took their place.

Walk down Kuhio Avenue or Ala Wai Boulevard and the vast majority of residential buildings you’ll pass will date from that initial clearing up into the late 1970’s. In a mere decade, the Waikiki skyline would become utterly unrecognizable from before, rising into a purely urban high-rise profile where four stories had once been unusual.

Today, when you talk about buying a home in Waikiki, you are talking about purchasing a condo. Period. A few houses still exist here and there, but they are the rare exception, not the rule.

More towers were added in the 1980’s and 90’s, but at a much lower rate due to running out of open properties to build upon. What has changed in recent years are the additions of extremely upscale condo residences, with world-renowned names.

Trump Waikiki is one such example, now joined by the Ritz Carlton Residences on Kuhio Avenue. Both promise, and provide, luxurious residences with beautiful views, services that cater to every need and all the trappings expected of a high-end property aimed at the very well-off. 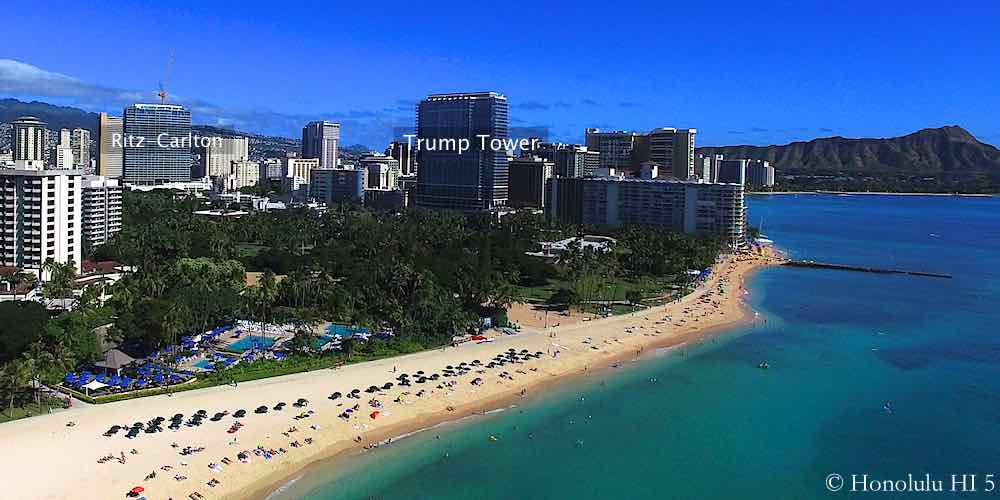 What’s surprising isn’t that Waikiki residences have started to follow Kalakaua Avenue’s shopping strip lead on targeting the Other Half. It’s that this neighborhood wasn’t the first to pursue the multi-story condo path.

Believe it or not, it was next door Gold Coast and Diamond Head communities who established modern oceanfront residences before neighboring Waikiki. Gold Coast condos are envied not just in Hawaii, but worldwide, and for more than just their stunning views on the Pacific. 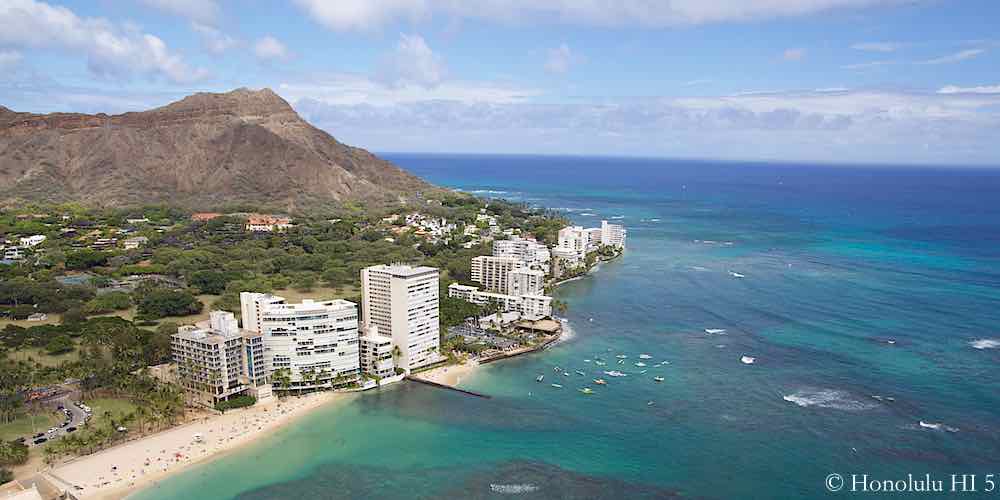 The row of buildings along the coastline were constructed in the 1950’s and very early 60’s, a time that pre-dated regulations that now require structures to be further away from the water. From some of these elevated homes it feels like you live on the surf itself, so close does it wash up, bringing the soothing sounds into your every moment.

In their early years they stood out greatly from the otherwise primarily single-family home community. That same dichotomy remains today, but the widespread vertical build-up of the rest of the city and the passage of time has turned them into established mainstays of their neighborhoods. Yet there’s another part of Honolulu that pursued a more traditional route in its development. 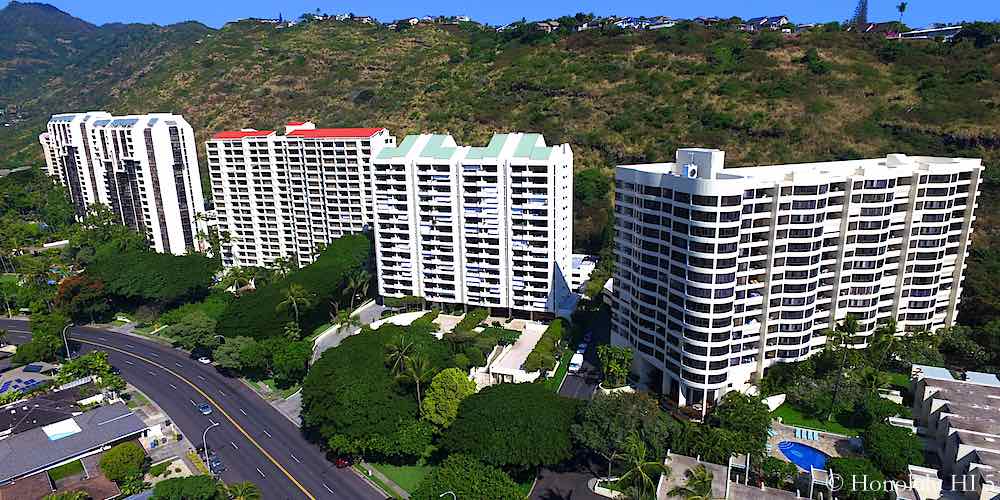 Some of Very Few High-Rise Condos in Hawaii Kai

Where Waikiki sprang upward on lots already mapped out and previously occupied, Hawaii Kai came out of basically bare land. Shortly after signing an agreement with the Bishop Estate in 1961, developer Henry Kaiser began building the neighborhood we know today.

Kaiser’s idea was to emulate Hawaii’s preferred low-rise profile, keeping the scenery wide open. No oceanfront towers obstructing the views of those behind. The marina was the centerpiece of his work, with homes built right on it, almost all of which are townhome condo properties.

Communities like Koko Isle, Kuapa Isle and the Kalele Kai are just a few of these in-demand residences. These condominiums, and numerous others off the water as well, restrict themselves to one or two stories, giving the feel of single-family homes, a departure from the sky scraping of urban Honolulu. 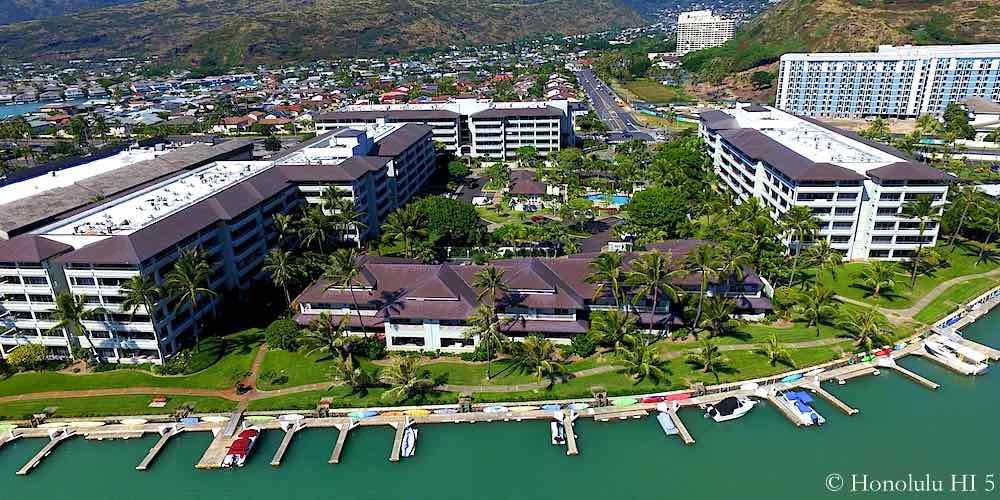 The build-up would go over the decades, starting in 1968 with Koko Isle and most of the marina area filling in by the late 1970’s. The overall neighborhood of Hawaii Kai would see construction until the first decade of this century, one of the last projects being the waterfront Hawaii Kai Peninsula. Since that time building has ceased, partly due to local residents opposing any further development.

Some condo towers did make it into Hawaii Kai, but with a very few exceptions like the marina-front Esplanade, they primarily are found on the sides and in the back of the valleys, where they benefit from open sight lines, yet without blocking anyone else’s. This is all part of the planning that has made the community so attractive to condo buyers.

Planning was the the key word for Hawaii Kai condos, just as it is for today’s development in Honolulu and all over Oahu. The determination to preserve Hawaii’s environment and feel has made it necessary. Nowhere is that more apparent than the biggest project in the city since Hawaii Kai’s construction – Kakaako.

Kakaako – The Next Step in Honolulu Condos 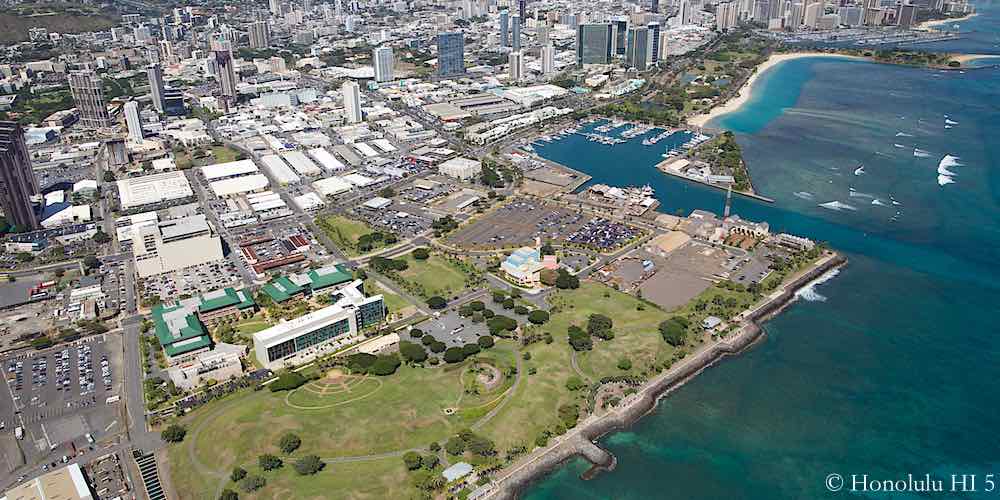 Innovative in its urban living spaces and pedestrian-oriented layout, it represents a new kind of lifestyle here, but one inspired and ingrained in local and Native Hawaiian culture. The condos here go beyond being vertical versions of bedroom communities.

Many will feature shopping and dining in their ground floors, with green spaces surrounding them for your recreation and relaxation. Some buildings even have such amenities as dog parks, jogging tracks and private pools, providing services and luxuries that make it possible to fulfill daily routines and pleasures without leaving your building.

The blueprint for this district, when completed, will comprise of residences for different economic levels. The trademark, especially in the early stages, however, will be luxury properties that take high-rise life to new levels. The initial fruits of Kakaako construction, such as Anaha, Waiea, Gateway Towers and Park Lane are proof of this.

All have attention-getting facades, from Waiea’s ‘cast net’ glass wall to Anaha’s jenga-like irregularity, they create a stimulating environment that plays a central role in making this a vibrant community.

Pristine ocean views, innovative architecture and design, interiors that can impress the most jaded real estate agent, plus cutting-edge green energy features that respect our Island environment. These are all part of the Kakaako experience. While not everyone will have the ocean vistas, the proximity to the water benefits all, making it a permanent and priceless aspect of home ownership here.

While this will be a truly vertical community, it will also be based around parks, green spaces, open air areas and a place where a walk is pure joy. This is no concrete jungle. Far from it.

Condo Wisdom: Know What You Want & Where To Get It
It should be clear now that the condos in Honolulu can’t all be lumped together in one category or grouping. Each of these neighborhoods fulfill a different lifestyle, were constructed in a variety of eras and times and with an intention and purpose all its own.

It’s an unsuspected richness in experiences that makes it so important your real estate search takes these factors into account. Finding the right home is always the goal, but sometimes the steps to getting there aren’t as clear. Knowing yourself is important. Just as essential? Knowing Honolulu’s distinct & wonderful condo neighborhoods.